…and I have three posts in drafts, but all of them need more work, but someone sends you a bunch of Conference memes, you get this post. 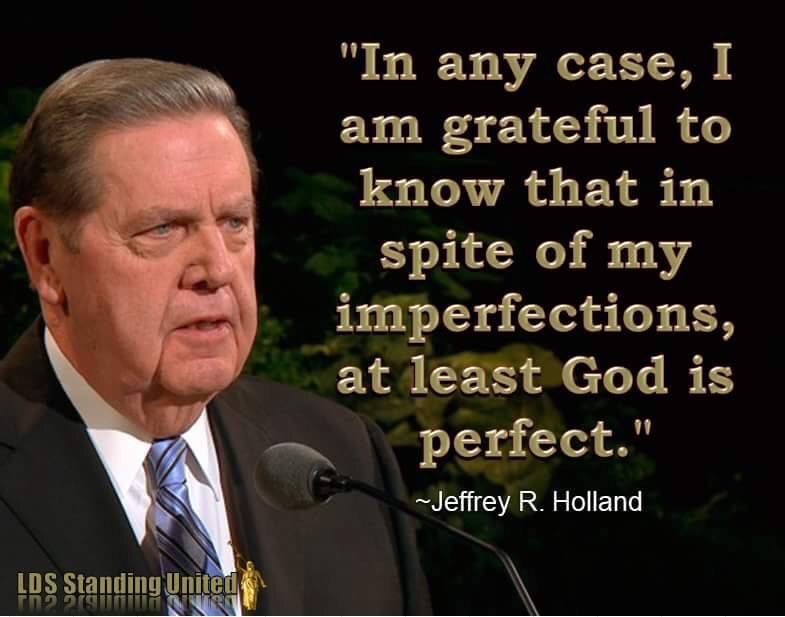 Tomorrow is my niece’s 8th birthday, and today she had her birthday party at an indoor playground place, here in Budapest. We all had fun, but boy, four 8-year-olds have enough energy to power a maller European nation for a week! I planned to take a few photos and then crochet, but instead I took over 200 photos and didn’t crochet. Hopefully there will be at least 10 good photos out of those 200! Hopefully tomorrow I’ll have a proper entry ready.

September was a rather busy month, as it is usually the case in Service Desk settings. The first week of September often brings the second highest volumes of the year (after the first week of January), and we service desk people prepare for that as best as we can. It still often results in a lot of work, overtime, and just generally feeling rushed all the time. During this crazy silly month there were some activities we did as well.

One such event was the Corvin Movie Night. One of the movie theatres offered a full night of movies for about the e 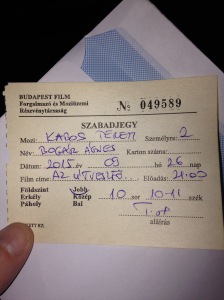 quivalent of two tickets. My friend Judy and I went and saw some films we had wanted to see for a while like Trainwreck (Bill Hader is my favorite SNL alumn), and the most recent Mission Impossible movie (Simon Pegg was awesome). Since one of the movies we wanted to see was full we accidentally ended up seeing a great Spanish movie, “La isla mínima“. It was a pleasant surprise, a film that managed to keep my attention even at 2 a.m. after three other films. I highly recommend it.

Part of the event was an Instagram photo competition. Judy and I both uploaded a few snapshots from the cinema and I was lucky enough to win one of the movie vouchers for two! We used it to watch the second Maze Runner movie. It was fun to finally win something! 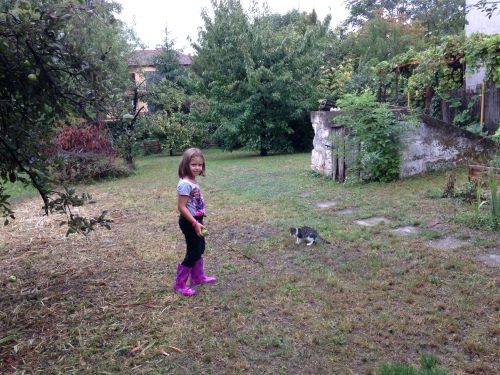 My sister, niece, and I made a visit to my frien Bea's. She lives in one if the suburban districts and has a huge garden. In the “olden days”mwe had one of our best team building events there. Bea and her then fiancé (now husband) Tomi have a cat, who was still quite a kitten back then. The two kids-my niece and the cat-had a blast playing in the garden. Despite rains in the morning and a forecast of more rain, we ended up with sunshine and only limited mud. We picked some apples while there, and came home with plenty of other fruits and vegetables from their garden. It was a very pleasant autumn afternoon.

At the end of September my niece decided she wanted to learn to crochet. We tried a bit at first, but after a while we ran into a problem. Can you see what it is. 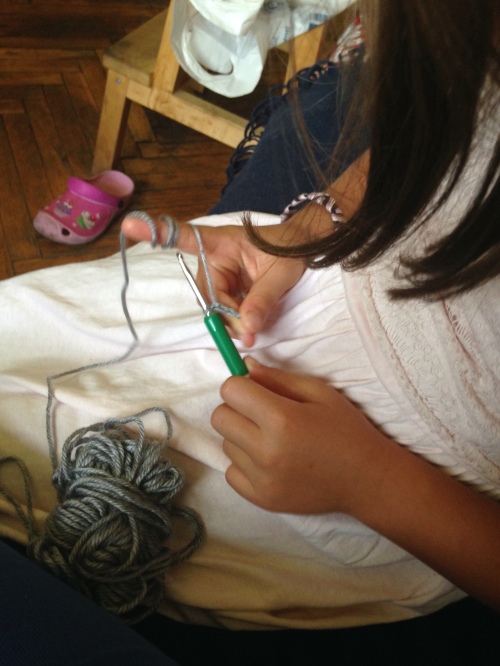 Yes, she is legt-handed, which would not be a big problem if I was, too. Alas, I am not, and I'm still in the process of teaching myself to crochet left-handed so I can show her how to do it. 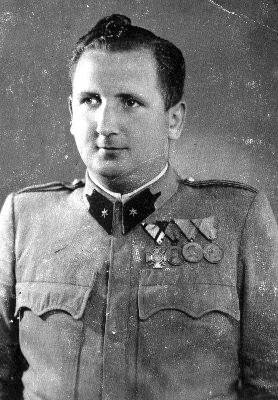 My maternal grandfather was born 100 years ago today. He was born during The Great War, he lost his mother and at least two siblings at age 3 to the Spanish Flu. He lost his firstborn daughter. His surviving two children had some disabilities: my mom was born with dislocated hips, my uncle had epilepsy and some mild developmental disabilities. Grandfather served in the army in World War II, lived in oppressive regimes. He passed away thirty years ago, so I was blessed to have him in my life for eight years.

My grandfather lived 200 km away in the city of Miskolc. He and my uncle would travel to visit us a few times a year, and we would spend a few werks in the summer with them in Miskolc. My second cousins are the same age as me, so we would sprnd countless hours playing in the garden. My grandpa took my cousin Judit and I to the grocery store to buy gummi strips, and he always let us make a mess on the patio. He gave the best gifts and he had a great sense of humor. My mom tells me he was good at business and always managed to provide for his family, including some luxuries. One family legend is about how he managed to get some bananas back in the late 50s or early 60s, when it was very very rare in Hungary. My mother thought for the next 30 years of her life that she hated bananas: the Cuban import was green, unripe, and tasteless, but they didn’t know that: it was the first time they had any. Later on in the 80s when bananas were only sold in the winter and often there were great lines for them, Grandpa bought us some every time he came.

Every August my great-aunt’s nameday was celebrated in their joint garden with lots of family present. My great-uncle woukd make fisherman’s soup from fish he had caught, and my cousins and sister and I would frown at the thought of fishbones. My grandpa and my great-Uncle crefully removed the fishbones and the not-so-kid-friendly parts, and convinced us to try it. Then we’d cook bacon on sticks and drip the lard on bread and eat together. It is one of my fondest memories from my, childhood, Judit and I running around the garden, pretending to be wild horses, and the grown ups letting us.

Today I’m searching for specific memories of him in my mind, and I have to admit I remember less than I wish I did. Looking through family photos there are only a handful of him: he was often behind the camera. When I look at his photo, though, I see some of my mother and some of myself in his face–and I even see him in my niece’s eyes.

He would be 100 years old today. I wonder what he’d think about the world we live in now. How different his childhood was from mine, and especially from my niece’s. I cherish the heritage he left behind with those family ties we have with our cousins 200 km away. And I miss him, like every Christmas Eve, when he, like my other grandparents, is missing from Christmas dinner. 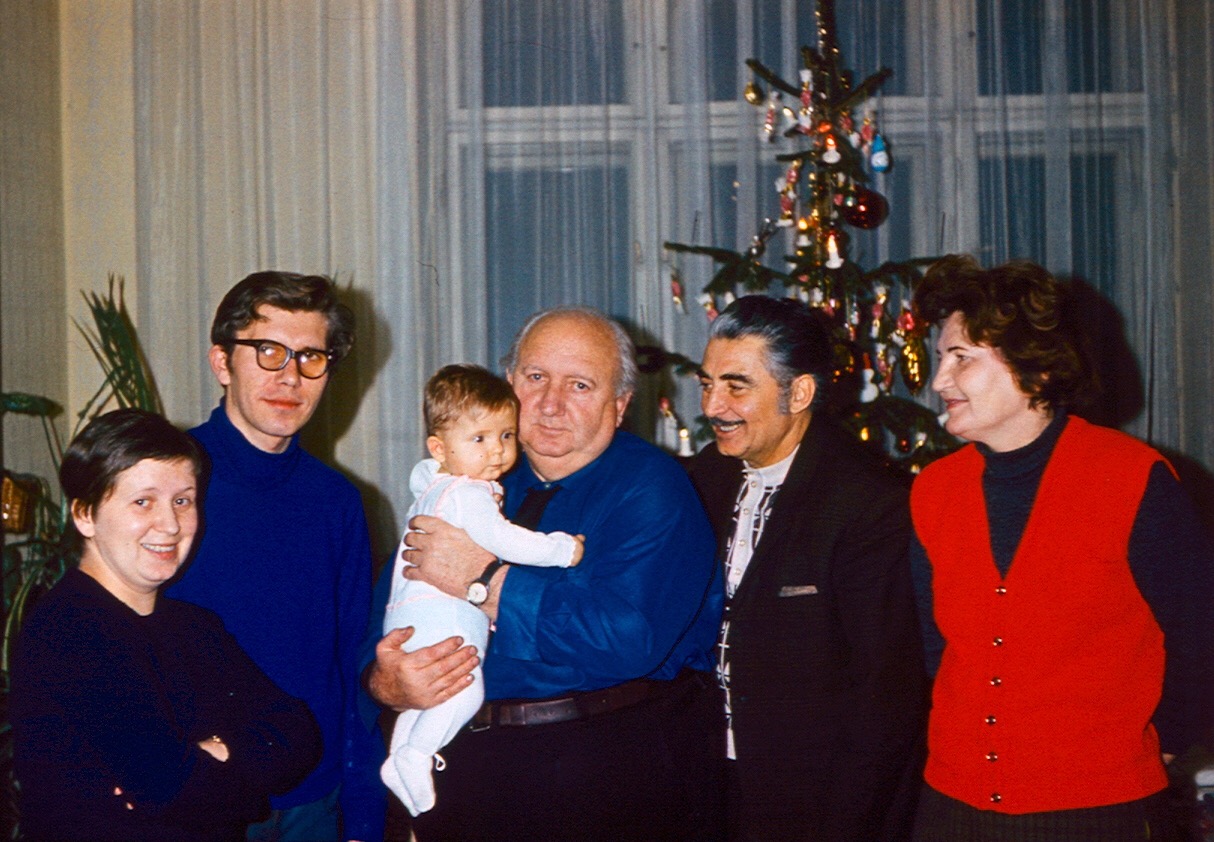 Mom, Uncle Lackó, my Grandpa holding me, and my paternal grandparents on my first Christmas.

I have a problem with blogging. Everyone always says, “It’s your story to tell.” However, the best stories, the ones that are the most worthy of telling are hardly ever just that: they are someone else’s story, too.